Showing posts with the label mccain
Show all 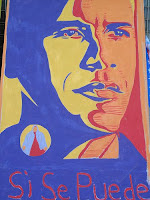 Politics Hispanics Support Obama over McCain for President by Nearly Three-to-One, Pew Hispanic Center Survey Finds Hispanic registered voters support Democrat Barack Obama for president over Republican John McCain by 66% to 23%, according to a nationwide survey of 2,015 Latinos conducted by the Pew Hispanic Center, a project of the Pew Research Center, from June 9 through July 13. The presumptive Democratic nominee's strong showing in this survey represents a sharp reversal in his fortunes from the primaries, when Obama lost the Latino vote to Hillary Clinton by a nearly two-to-one ratio, giving rise to speculation in some quarters that Hispanics were disinclined to vote for a black candidate. In this new survey, three times as many respondents said being black would help Obama (32%) with Latino voters than said it would hurt him (11%); the majority (53%) said his race would make no difference to Latino voters. In addition to their strong support for Obama, Latino vot
1 comment
Read more
More posts