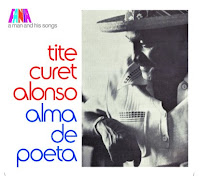 It was in Old San Juan’s “Bombonera” restaurant in 1977 when I spotted the traditional straw hat and signature daisheke on the man sitting at the counter. Catalino “Tite” Curet Alonso was holding a note pad and tape recorder when I sat beside him. He was reserved, diffident and guarded, until we began talking about Ismael "Maelo" Rivera’s, “Esto Si Es Lo Mio” that I was reviewing for Billboard Magazine. That’s when a glint appeared in his eyes, a smile crossed his face, and we bonded for that moment around talk of ‘Maelo, plena, bomba, poverty, race, politics, religion y música!

Curet’s name was ubiquitous, gracing hundreds of album credits of many of the top Latin music artists of the ‘60s, ‘70s, ‘80s and ‘90s. He penned more than 2,000 songs, spawning and jump-starting the artistic careers of many, from La Lupe, to Cheo Feliciano to Frankie Ruiz. The most in-demand composer of tropical music, Curet’s songs were guaranteed hits, and classics today.

“You had to take a number and wait on line,” Ruben Blades told the L.A. Times when Curet passed away. “His songs could revive any career, so there was always a fight to get new material from Tite,” recalled the Panamanian singer/songwriter whose interpretation of Curet’s “Plantación Adentro” also hit the top of the charts.

Curet helped father the nascent salsa movement that was marking time in clave through the streets of Puerto Rico and Latin New York. Through news events, music and lyrics, his words inspired hope and faith, solace and joy during a time of social upheaval. In more than 2,000 tunes, Curet was the musical narrator of current events and national pride, romance and religion. He wrote in a time when the social reality of the poor was in direct opposition to the political power line, leaving music as the life-support of hope and faith. Tite Curet reflected the face of a community in need of answers.

His talent for composing extended beyond the borders of the Caribbean dipping into Mexico, Venezuela, Paraguay, Spain and Brazil which he credited for receiving his best musical training referring to them as the “sorcerers of ‘el medio tono’,” (the half tone). His merengue for Los Hijos del Rey, “Yo Me Dominicaniso” made much noise while Tony Croatto’s version of Curet’s “Cucubano” became a hit, later recorded by Menudo. From Chucho Avellanet to Nelson Ned, Tite Curet Alonso was a pivotal figure in the musical repertoires of many Latino superstars.

A compilation of the music of one of Puerto Rico’s most important composers of the late 20th Century now comes to light after a fourteen-year absence in Puerto Rico. Emusica has just released a 31-tune double CD set, featuring some of Curet’s most-loved works.

“It was a cultural crime,” notes Latin music writer Jaime Torres Torres of El Nuevo Dia. “An entire generation was deprived of the genius of this notable and creative songwriter.”

“When a younger generation cannot hear the songs of the masters that came before them, they create their own,” adds Richie Viera of the Viera Record Shop in Puerto Rico noting this lack of Curet’s commercial hits on radio as a contributing factor to the growing trend of “reggaetón” while salsa music still struggles on the island.

This compilation reflects several of the master composer’s themes. However, Curet was most proud of his writing skills, in particular his journalistic ability often pointing to his scant use of adjectives in crafting a hit number. Tite Curet wrote for newspapers, magazines, hosted radio shows and was later writing screenplays for stage and television as well as children’s songs and hymns.

To read Aurora Flores' complete article profiling Curet, go to her site at