On the Puerto Rico Quarter 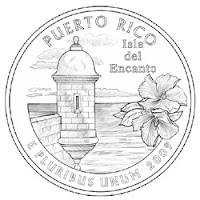 Que cool. La Isla del Encanto will soon have a U.S. Mint commemorative quarter. The U.S. Treasury earlier this week approved the design of the coin, which will be part of the popular U.S. states' series and will feature a little Spanish. I like that!

I can't wait to get my peseta, which also will feature a garita looking out to the sea and Puerto Rico's official "state" flower, the hibiscus.

The coin will begin circulating in March.

One of the biggest movers and shakers to get the Puerto Rico quarter approved was boricua Congressman Jose Serrano who represents the South Bronx.

At his Facebook site, Serrano states that he is "happy that, as a result of his law, Washington D.C., Puerto Rico and all the territories will now be included in the quarters program."

For more information about the Puerto Rico quarter, go to
http://coins.coinupdate.com/puerto-rico-quarter/ -- Clarisel Gonzalez

Editor's Note: Here's a link to a report I wrote on this topic last year:
http://puerto-rico.suite101.com/article.cfm/puerto_rico_to_get_a_quarter
on December 17, 2008 No comments: