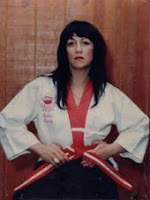 Bronxite Shihan Warixi Soto is a high ranking martial artist, a multiple Hall of Fame recipient and the creator and Executive Director of F.A.S.T. (Female Alternative Street Tactics) and "Secure Your Child."
F.A.S.T focuses on urban survival and has been created to empower and teach women and teen girls how to avoid all forms of attacks and confrontations. The program was created for the streets of New York City. The other program teaches children ages 4-12 street awareness, self protection and self defense. Both programs have been taught throughout the city since 1983. That same year Shihan Warixi was awarded the rank of “Kaiden” in “Miyama Ryu Combat Ju-Jutsu.” The rank is very similar to 10th degree black belt, and it’s the highest rank awarded. Her specialties are anti-rape tactics, live blade knife techniques, and Ju-Jutsu for adults and children.
She has trained and holds certificates in weaponry. She has training in Jodo (the long staff), bokken (wooden sword) and tanjo (short staff).

Q: What got you into martial arts?
A: It was a few things that contributed to my getting into the martial arts. First, I loved Angela Mao, Bruce Lee, and Sonny Chiba. Second, I grew up fighting. When I was little, my father would take me to the fights. Third, I needed to get in shape. You can see it was a few things.

Q: Were you ever a victim of a crime or bullied?
A: Whenever I got bullied, I had to fight or my mom would kick my butt. I grew up fighting. I was the oldest. Sometimes I had to defend my brothers. I’ve always hated bullies.

Q: Were you often the only female in the martial arts class and how did the men treat you?
A: Yes. Some men were really soft, treating my like a real girly girl. Others were really really hard like they wanted me out of there.

Q: Where did you grow up?
A: I was born in East Harlem and lived there until I was eight. We then moved to the Bronx.

Q: How was it? Were you a tough girl growing up?
A: No. No gangs, No bullying. In fact, I hated gangs and bullies. I was more the athletic type: bike riding, swimming, horseback riding, skateboarding, knife throwing, street basement karate.

Q: What do you teach your students?
A: Wow, there is a whole lot that I teach my students. If I’m teaching my children’s program “Secure Your Child,” then I teach everything from how to walk alone, how to deal with bullies and strangers and much more. I don’t teach children about weapons. When I teach my “Female Alternative Street Tactics” eight-hour program, I teach women how to use everyday items for self defense. I also have a workshop called “Using everyday items for self defense.” There I teach how to use everyday items, including weapons.

Q: Could you tell us the certificates you have received and what is the role of the shihan?
A: I have received numerous awards, really too many to mention. I have been inducted into seven Hall of Fames. My most priced award came from my own peers in Miyama Ryu Combat Ju Jutsu. I was given “The Keeper of the Lost Art” Award for “Woman of the Year” in 2004. Shihan is my title, my rank is Kaiden. It means that I have devoted my life to this art, and I am qualified to teach, and rank. It means “All things passed.” Check out my blog at www.shihanwarixi.blogspot.com .

Q: You seem to have a special bond with children. Why?
A: I love children and truly believe that all the children in the world are my children. Children are loyal, honest, truthful and fun. More adults should try to be like children.

Q: Do you have children and are they also in martial arts?
A: Yes, I have three children. When they were young they were in the art. They ranked in Judo and Ju Jutsu. My daughter still trains. 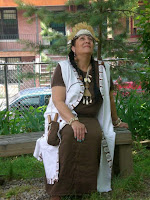 When she is not involved in martial arts, she devotes time to her love for the Taino culture. She enjoys educating people about the rich history of Boriken. For more information, visit www.kukarey.com. – Ismael Nunez

(photos courtesy of Shihan Warixi Soto)
on February 26, 2009 No comments: