Moviegoers to get spooked at 'The HORRORphiles' 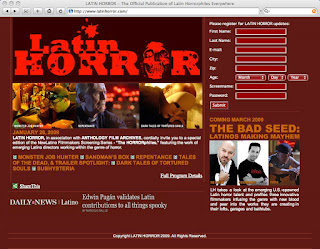 Edwin Pagan is the man behind the Latin horror revolution If you are into horror flicks, "The HORRORphiles," featuring the work of emerging Latino directors working within the genre is playing a series of horror movies tonight in New York City. Latin Horror, in association with Anthology Film Archives, presents a special edition of the NewLatino Filmmakers Screening Series - "The HORRORphiles." NewLatino Filmmakers is billed as the best and only independent Latino “cinematheque” showcase in New York City -- now in its 7th year. "The HORRORphiles" will run from 7-9:30 p.m. tonight at Anthology Film Archives, 32 Second Avenue at Second Street in the Lower East Side. The price is $6 at the box office. Tonight's "Horrorphiles" will feature "Monster Job Hunter" by writer/director Yehudi Mercado, "Sandman's Box," by writer/director Gilberto Flores, and "Repentance" by writer/director Julio Antonio Toro, all sh
Post a Comment
Read more
More posts