Empire of Desire at MediaNoche 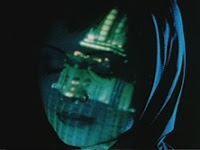 Ciesielski creates an elusive metaphor of power that weds steel and brick to flesh, resolving the public and private spheres in a manner closer to pornography than art and rendering such distinctions senseless by the brute force of the imaging. Think Abu Ghraib.

For Ciesielski the "installation is a visual bridge between sexuality and architecture in New York City: Multi-screen, multi-color, multi-woman, and one desire. It is the result of many years of seduction from both sides."

Tadeusz "Ted" Ciesielski is a filmmaker from Poland, where he studied at the famed Lodz Film Academy. During the eighties, he directed music videos for KULT, SIEKIERA, and Cityzen GC. In the nineties, he travelled with a film camera throughout Europe and China, eventually settling in New York City. His obsession with urban landscapes results in highly personal and interpretive projects about the Twin Towers, the Empire State Building, billboards, oil tanks and garbage. Some titles are: Requiem 2001, My Empire, Last Letter, and My Gates.

ABOUT MEDIANOCHE:
Judith Escalona, director’s statement
Our media practice is rooted in community, utilizing technology as a tool for transgressing the dynamic, cultural space of Spanish Harlem in order to engage, incite, and transform the dialectics of alternity and marginalization.

MediaNoche, a project of PRdream.com
MediaNoche is the place where art, technology and community converge. We offer artists working in new media exhibition space and residencies in order to provoke a dialogue that blurs all lines of marginality and alternity.

Unique among arts and technology groups in New York, MediaNoche is directly linked to the oldest Latino community of the city, Spanish Harlem, and has showcased a roster of local and international new media artists.

Note: Judith Escalona will talk to PRSUN Radio next Wednesday night at www.blogtalkradio.com/prsunradio. See related entry below.
on March 26, 2009 1 comment: