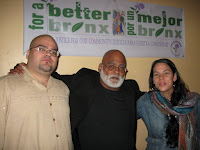 The organization “For a Better Bronx,” a community-based organization in the South Bronx, which fights to achieve environmental, social and food justice through education, community organizing, and empowerment held a special event earlier this year at St. Luke’s Church in the Bronx. That day, long-time activist Vicente “Panama” Alba was honored for many years of service to the organization and his commitment to people. Vicente has done it all in his many years of activism, including being a member of the influential Young Lords Party, which this weekend celebrates its 40th anniversary, and being a member of the underground group the F.A.L.N. (Fuerzas Armadas Liberacion Nationalista). He has fought against police brutality and against the war. He is an environmentalist. He was also active in the movement to get the Navy out of the Puerto Rican town of Vieques.
With the anniversary and reunion of the Young Lords, Alba reflects on his time with the organization and says it continues to shape his work as an activist.
Q: Let’s talk about the Young Lords. It’s been close to 40 years since they took over the church at 111th Street and Lexington Avenue. Why are the Young Lords still in the minds of people to this day?
A: As far as the history of my involvement, I am a proud former member of the Young Lords Party. That experience has paved the road I’ve been walking since.
Q: Should there be a memorial in this (NY) city despite their birth in Chicago, Illinois?
A: As far as should there be a memorial for the Young Lords, it needs to be clear that the great maj 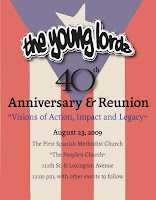 ority of us never thought that we were making history. That was not our motivation. We just loved our people, hated what we were being subjected to, and dreamed of a better world. Those are the things that drive me to do what I do to this day. We, without realizing it, did make history. All the credit is deserved by Cha Cha, Sal, Omar, and the women who turned a gang into a revolutionary force and inspired young people in NY and then other parts of the country to join. I have to say, though, I believe that if the YLO had not happened in Chicago and moved people here, something else after that would have been born here because the reality we demanded it. As far as a memorial, that is not for me to say.
Q: Richie Perez was in the Lords with you. Can you tell us a little about him? He once stated that being in the movement keeps you young and strong.
A: As for as Richie Perez, the fact that from amongst all the people who lived for our people, you ask me about him speaks for itself. I first met Richie as one of the fellows when I was a teenager. He was soon after a teacher at Monroe High School where I was registered, but never went. Richie along with Cleo Silvers were the two most influential people at that time in my life. They knew me as an out-of-control rebel and guided me to the path I’ve been on since I joined the YLP. Until his death, he was my brother, my friend, companero de lucha, and is today one on whose spirit I call on. Richie was one of the most caring and committed people I’ve been honored to have in my life. Probably the most brilliant person I have ever come across. He never asked others to do something he would not do himself.
The Young Lords celebrate its 40th anniversary and reunion Sunday with an event at the First Spanish Methodist Church aka "The People's Church" in East Harlem. -- Ismael Nunez

(photo by Ismael Nunez of Vicente "Panama" Alba, center, with his children at the Better Bronx event)
(Young Lords flier; click on image for larger text)