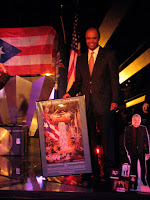 President Obama and Vice President Biden created the White House Office of Urban Affairs to develop a strategy for metropolitan America and to ensure that all federal dollars targeted to urban areas are effectively spent on the highest-impact programs. The Director of Urban Affairs will report directly to the president and coordinate all federal urban programs.

Carrion has served two terms as Bronx Borough President and one term as the President of the National Association of Latino Elected and Appointed Officials (NALEO). As Bronx Borough President, Carrion oversaw the creation of 40,000 new units of housing in seven years, 50 new schools, $7 billion in capital and infrastructure expenditures, and over $400 million in new parks and parkland renovation. Prior to his service as Bronx Borough President, Carrion represented the 14th City Council District on the New York City Council and also served as an urban planner at the NYC Department of City Planning and a teacher in the New York City Public Schools. Carrion received his bachelors in World Religions and Philosophy from King’s College in 1985 and his Masters in Urban Planning from Hunter College in 1990.

Congratulations to Carrion on his accomplishment.