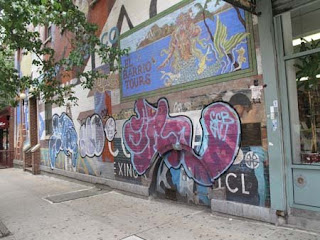 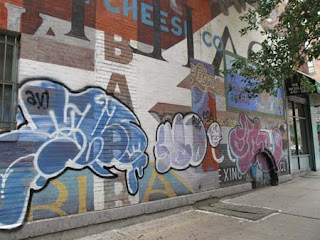 During the early hours of June 13, one of El Barrio's s most famous outdoor artworks, the Spirit of East Harlem mural, was mysteriously defaced. The landmark painting has significant historical roots in the history of Spanish Harlem and has served as a cultural attraction for thousands of students and tourists from around the country and the world.  Commissioned by Hope Community, Inc. in 1978, the four-story Spirit of East Harlem mural was created by Hank Prussing and featured local residents engaging in everyday activities. Artist Manny Vega, who'd served as Prussing's apprentice, restored the badly weathered mural in the mid-1990s. On June 24 , the main wall of the Graffiti Wall of Fame was also painted over; although the alteration may have been in preparation for a new project. Located on the northwest corner of 106th Street and Park Avenue, the Graffiti Wall of Fame was the first legal and organized wall for graffiti writers to showcase their skills. Created during the early 1980s, the "Wall" has become a formidable means of artistic expression for a group of artists led by the Tats Cru. Manny Vega's internationally acclaimed Julia de Burgos mosaic on East 106th Street does not appear to have been defaced, nor have any works by artist James de la Vega. East Harlem Preservation has reached out to elected officials and other neighborhood agencies to address the matter and hopes to engage in public forums to highlight the importance of preserving local artwork. Stay tuned for further updates. For more information, www.eastharlempreservation.org.
Photos and text courtesy of Marina Ortiz of East Harlem Preservation
on June 24, 2009 1 comment: