After several years on hiatus, Muevete is back.
Earlier this month, the Muevete youth conference was held in the South Bronx. Activists, student organizations, and community based organizations bonded at the BronxWorks Cornerstone Betances Community Center on St. Ann’s Avenue for the 13th annual Muevete conference.
Muevete is the Spanish word for “move yourself,” and the young and older people in the conference were definitely doing moving. They were moving in the memory of one of their own who died too soon. They were moving to help make the quality of lives of today's young people better. 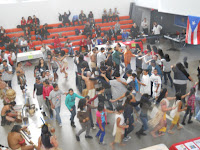 The previous Muevete conferences were hosted at bigger named venues such as Columbia University, Hunter College, and City College. But they stopped.
Lissette Nieves said she believed it was important to reactivate the youth conference.
She spoke about her old Muevete friend Daniel Mejia who died earlier this year at the age of 32 from complications of pancreatitis. She met Mejia when he was a high school senior who wanted to help Latino youth with education, community and civil rights issues. After his days at Muevete, he went on to work for several nonprofit groups and became an advocate for health and gay rights issues.
His death helped bring new life to Muevete and the need for it.
"The need for Muevete is there and needed," Nieves said.
Right after Mejia's death, Nieves and others realized that the conference had to resurface to move a new youth generation of movers. 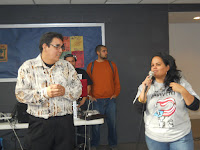 What better place than in the South Bronx?
Ben Ramos, a Bronx activist said, "A lot of the issues affecting Latino youth back in the 1990’s when this organization was created are still in effect. We wanted young people to know and learn that there are organizations, history, that is always available for them, and where they can always go for help when needed."
At the conference, young people were exposed to several community based organizations such as El Puente Academy located in Brooklyn and the Justice Committee of the National Congress for Puerto Rican Rights. Both groups hosted workshops.
Ramos said: “It’s the perfect location for the Latino youth to learn/organize/ and be united! Right here in the boogie down Bronx."
Dance choreographer Anthony “Omen” Barner who works at the center and is the creator of the dance group “Swagged Out Kids,” said, “We promote positivity and the growth of the participants of this center to engage in their minds and spirit."
Two other main highlights included the serving of basic Latino soul food: rice with beans, chicken, and salad; and cultural performancesbomba, plena, hip-hop dancing, and salsa and mambo classes. There were even free dance classes for everyone. I must admit I got into the dance groove, dancing gracefully with a good friend Denise from the YAI chapter in the Bronx.
As we danced, Denise said, “Enjoy, Learn, Educate, Organize, Friendship."
It was the right place at the right time.
I am today and tomorrow moving forward. Muevete.

Ismael Nuñez is a freelance writer based in East Harlem. He is a contributing writer to PRSUN.