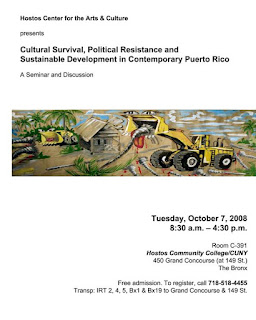 Community calendar Cultural Survival, Political Resistance and Sustainable Development in Contemporary Puerto Rico …is a bilingual (English-Spanish) one-day seminar on the effects of development and globalization on traditional cultures in Puerto Rico focusing on the recent history of the coastal communities of Loíza and Piñones and the island of Vieques . The participants represent a cross section of leaders in the struggle for cultural and environmental survival: educators, cultural activists and advocates of alternative strategies for development. The seminar serves as an introduction to BomPlenazo 2008, the Hostos Center for the Arts & Culture’s biennial celebration of Afro-Puerto Rican culture. This year, the festival will focus on the bomba and plena music and dance traditions as they are practiced in the communities of Loíza and Piñones, two of the principal centers of Afro-Puerto Rican culture. Founded by runaway slaves and freedmen in the 19th century, Loíza and its n
Post a Comment
Read more
More posts