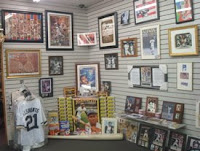 Marking the anniversary of the death of one of Puerto Rico's giants, Latino Sports in the Bronx recently had an exhibition in honor of Roberto Clemente, the fallen baseball player. December 31 is not only New Year's Eve. It is a day to remember Clemente, who was more than just an athlete. He was a humanitarian who died on his way to help others. On December 31, 1972, Clemente had taken upon himself to direct personally a relief mission to earthquake torn Nicaragua. Bound to Nicaragua, Clemente and four others loaded a small DC-7 plane with food and supplies that never got past the San Juan, Puerto Rico border as the plane almost immediately crashed into 30 feet of water in the Caribbean Sea. During the month of December, Latino Sports on the Grand Concourse celebrated its 2008 21 Days of Clemente exhibit at the clubhouse. Latino Sports is among those involved in the movement to retire of Clemente's 21 from Major League Baseball in tribute to the legacy of Clemente. For
Post a Comment
Read more
More posts