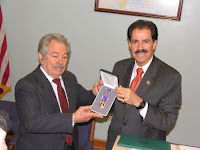 Congressman Jose Serrano (at right) recently presented the Purple Heart to Jose Velez-Valentin, a Bronx veteran wounded in the Korean War. Mr. Velez-Valentin had been working to get appropriate recognition for his combat-related injuries from the Defense Department, and ultimately came to Serrano’s office for help. The ceremony last week was the culmination of that work, and a long-overdue acknowledgment of Velez-Valentin’s sacrifice in Korea.

“I was pleased to have been able to help Mr. Velez-Valentin to gain recognition for his service to our country—and the wounds that he suffered as a result,” said Serrano. “Our nation makes a pact with those who serve in the Armed Forces, and part of that pact is making sure that their sacrifices do not go unnoticed. Today we are honoring the heroic service of a Bronx resident and thanking him for what he did for our nation more than 50 years ago in Korea. On behalf of the Bronx and as a representative of our federal government, I thank him for his service and salute him as a veteran wounded in defense of our nation.”

Jose Velez-Valentin was seriously wounded by artillery fire in Korea on May 29, 1953 while advancing against the enemy. He served in the 14th Regiment of the 25th Infantry Division and was discharged as a Corporal, athough he apent time as an Acting Sergeant during the Korean War.

source: Reprint from The Serrano Report; photo courtesy of Serrano's office
on May 19, 2009