Cotto gets his revenge at the right place 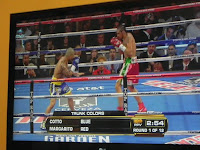 In their first bout in Las Vegas, boxer Antonio Margarito had his hands padded enough to do serious harm to Miguel Cotto. It was not a clean fight. That's for sure.
In their second fight last weekend at Madison Square Garden, Cotto got his revenge, winning almost every round and scoring a Technical Knockout.
Two reasons why Cotto won:
1. He fought toe to toe with his opponent hardly staying away from the ropes.
2. Margarito was in the wrong place. Cotto was in the right place he’s fought at the garden in the past and has not lost a fight at the garden.
While Margarito claimed that Cotto "hits like a girl," Margarito's face was red and his eye was completely shut. He was hurt so badly that ringside physician had no choice but to stop the fight in the beginning of the tenth round with Cotto retaining his WBA Super Welterweight and proving he was the real champion.

Ismael Nuñez is a freelance writer based in East Harlem.
(photo by Clarisel Gonzalez)